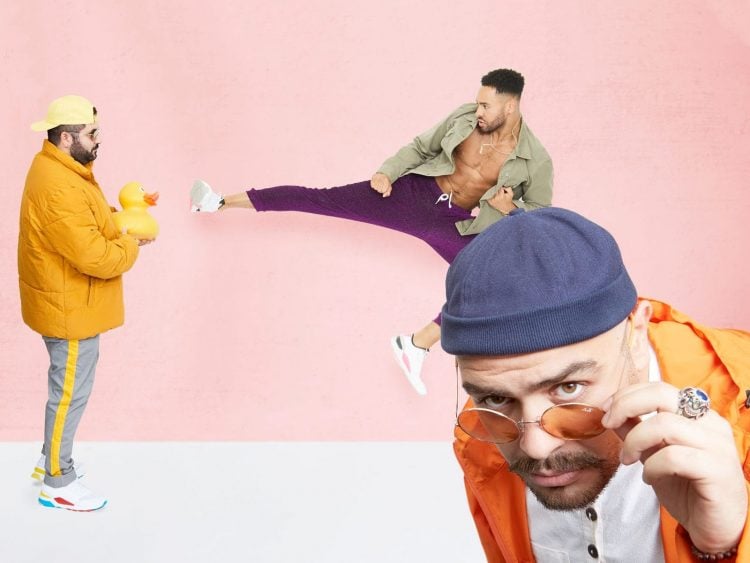 As much as critics claim U.K. garage mutated into dubstep roughly 10 years ago, this groovy, dirty, yet bouncy subgenre is far from dead, as evidenced by JADED’s new single “Slippin’”. A collaboration with Black Caviar and Antony & Cleopatra, the track out on Don Diablo’s Hexagon imprint feels cut from the mid-2000s, and takes us back to a point when dance music felt less mainstream.

As a trio, JADED – made up of Londoners Nari, Jordan, and Teo, who all met in a Chiswick studio’s smoking section – reflects the city’s growing melting-pot culture. Their backgrounds and experience have shaped their sound, and so far, that’s resonated with listeners. Single “Pancake” racked up 7 million Spotify streams, and track “In The Morning” made its way onto BBC Radio 1 and KISS FM playlists. As well, they’ve spent time in the studio with Avicii, Rita Ora, and Paul McCartney and have gotten support from such prominent DJs as Fatboy Slim, Claude Von Stroke, and Jax Jones.

As they forge onto the next level, we had a chance to ask them about their new single and their rising career:

As a production trio, how did you guys start working together?

We actually all met in a studio eight years ago. We were all working on different projects at the time, but the chemistry was infectious and we knew we had to get something in.

Often in a group, members have defined roles, whether it’s working on the beats or melody or focusing more on DJing. How does JADED operate?

Primarily, we are all producers, so we pass the burdens around to get the job done as quick as we can! Jordan has a great voice and real knack for writing, so that helps a lot with our tracks.

You’ve been signed to Hexagon Records. What has it been like working with Don Diablo?

Working with Don has been a real pleasure. The man is on fire at the moment and a real inspiration to us all, so it was a no brainer when he asked to take “Slippin’”!

What was your process for putting together your latest single, “Slippin’”?

The whole thing started with us collabing with Antony & Cleopatra on the vocal. Anita laid down the dopest vocal, and then we took that and worked with Black Caviar on the production, mix, and master, and the rest isThis track involves a couple of collaborations, including Black Caviar and Antony & Cleopatra. How did you all decide to work together?

It was written in the stars. Things aligned themselves up, really. We knew we had a sick vocal, so we wanted the production to be sick, too, so once we had something we were happy with, we hit up our friends Black Caviar in New York for that extra sauce and they just threw the whole bottle in!!! Spicy!!!

Do you have any plans for a follow-up track?

Yep – 100 percent. [It’s] coming very soon and can confirm it will tear the roof off

Your background pulls from London’s underground dance scene yet also feels a bit bouncy. How would you describe your sound?

As festival season’s practically here, where should we expect to see you over the summer?

We are excited for this summer – it’s looking like it’s gonna be lively one. We have a few U.K. and European festivals lined up, so keep your eyes peeled

In terms of travel, what do you guys do for grooming and getting ready?

Nari used to have a massive curly moustache that required a lot of DAX, which he used to swear by. But, now the moustache is gone and he has stubble and a clean-shaved head (very shiny), so he uses a natural bristles shaving brush, shaving cream, and a Gillette fusion blade that he can’t live without. Nari also uses a beard trimmer and a Narciso Rodrigues aftershave.

Jordan uses one of those twisty curl sponge things to give his Afro definition, ‘cause if he doesn’t use it, he will just look like a bad Will Smith impersonator from Fresh Prince. He is also covered in coconut oil, which gives him that tropical smell 24/7. Jordan also uses a beard brush, beard trimmer, and Tom Ford aftershave. Teo is rougher around the edges and uses a beard trimmer to keep his stubble in order.

Other essentials that we can’t travel without are portable speakers, laptops obviously, and vodka that has been distilled at least twice.

What products can’t you live without on the road?

For Teo, it’s definitely his switch…the guy may have arthritis at this point from excessive playing and may need time off, which is great news!

Already, you guys have received significant support and racked up a large amount of streams (55 million and counting). From here, where do you see your career going?