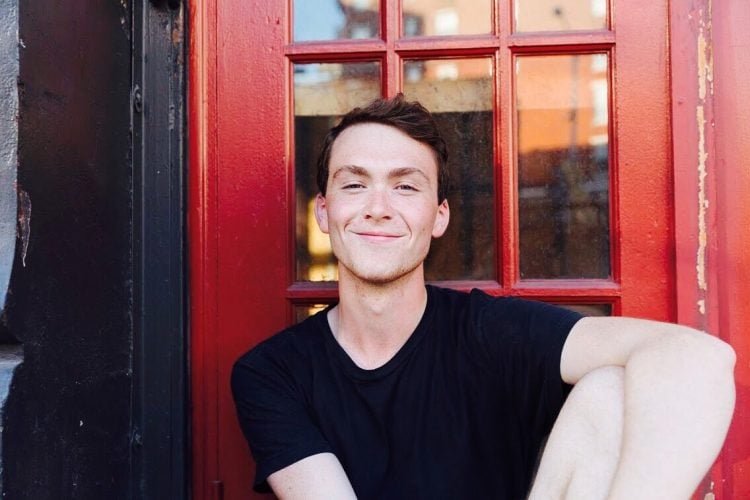 Often, when we speak to filmmakers, it’s with the benefit of hindsight. They can reflect on a process that either went to plan or didn’t and their experiences are colored by the final film and the reaction to it. It’s fascinating then, to speak to a filmmaker who is at the very beginning in every way possible.

Twenty-year-old Henri Fitzmaurice, a student at Carnegie Mellon in Pittsburgh, is using his college years in a way that outstrips most of his peers. No interning at tech start-ups or drinking his own body weight at parties for Fitzmaurice; instead, he’s travelling Vietnam, tracing his father’s footsteps from the war for his documentary Vietnam After Vietnam.

On Boxing Day 1966, Fitzmaurice’s father landed in Bong Song as an 18-year-old new recruit. When he finally left, he took with him two things that accompanied most young soldiers back to America: a sense of confusion at the horrible things he’d witnessed in a beautiful country, and a serious case of PTSD.

The stories he shared with Henri as he got older piqued his son’s interest in the country and the after-effects of a war America has desperately tried to forget.

Henri is now travelling Vietnam, seeking out American veterans who returned to the country decades later and hearing their stories about how it’s helped healed psychological and physiological wounds from the war.

The flipside to that is the small rural communities in Vietnam that still live every day with painful reminders of the war and the efforts different organizations are making to free them and help them to move on.

It’s an ambitious concept and one that feels extremely prescient as American foreign policy is once again under the microscope. We spoke to Henri as he prepared to begin filming in South East Asia.

Meeting with a family who’s father is a vet and their children are Victims of Agent Orange.

Where did this whole idea spring from?I don’t think there was just one catalyst necessarily. I got this grant from my university earlier this year and with it was a research component in a developing country.

I knew it was approaching the 50th anniversary of when my dad deployed to Vietnam. He hadn’t been back since he went there in the 60s and I’ve never been to Asia, but it was something that I always dreamed of.

My dad spoke a lot about how beautiful the country was and how there was this juxtaposition between being there fighting for your country, but in a political climate where not everyone agreed with what they were fighting for or about the destruction of this gorgeous land and these beautiful local communities, whether that was by militia or bombs or landmines.

What’s fascinating to me is how much of it still exists today and how it still has a profound effect on the local communities, especially around the demilitarized zone in central Vietnam.

I didn’t really know this would be a documentary at first. I knew I wanted to do a research project and then I thought, well why not go coast to coast, all the way up and down the country going from base to base where my father was stationed.

Was stopped randomly by a vet on the street and he told his story- fled the north and fought for the South for a year at the end of the war. We went on a friendly 30KM motorcycle race together to old monuments in Quang Tri.

I can’t imagine the nervousness or anxiety in returning to a place that you associate with a very particular time in your life. For many of these American veterans it was the most monumental time in their lives. So many regular Americans who never served will never come close to understanding what that experience was like.

There’s a pocket of around 100 American veterans I’ve been in contact with who have either gone back for long periods of time or moved there, and so many of them are suffering from PTSD or other disabilities or diseases that are direct consequence of the war.

A lot of this inner turmoil you don’t necessarily see on the outside. The ones that fascinate me are the ones who went back with their families and suddenly they found peace.

Not necessarily for everyone and not miraculously, but suddenly all of these night terrors and tremors that are associated with PTSD started to fade away because they were able to find peace with the land.

So many of them have talked to me about how surprised they were at how welcoming the Vietnamese people were, especially to American veterans who had been quite literally shooting them down.

What’s your objective for the next few weeks in Vietnam?

I’m really excited amplify the voices of these American veterans and get more hands-on with the organizations associated with removing Agent Orange. Agent Orange obviously was the terrible dioxin poison that still sits in the land there. Thousands of square miles are still poisoned.

They sprayed over 20 million gallons over 10 years. Four and a half million acres are still affected. These are staggering numbers that I can’t quite piece together. That’s like the size of California. So many of these organizations are local ones that don’t receive much funding.

They have limited resources to clean up this contaminated land that is causing birth defects, deaths, facial deformity.

Covering landmine removal in a landmine field in Quang Tri (poorest province in Vietnam and one of the most affected by the war because it’s on the DMZ).

I’m very fortunate not to be in a position where I’m walking down the road to school and I find myself in a situation with an unexploded bomb from 50 years ago. I don’t think many Americans have any experience with that.

These communities haven’t been able to live at peace. They’re living every single day affected by a war that ended almost 50 years ago.

The impression is always given that America has tried to forget about Vietnam, whereas Vietnam, because of the simple fact that the conflict happened in their country, has found it much harder to forget.

From what I understand, Vietnam has globalized at a rapid rate compared to other developing nations. You look at cities like Ho Chi Minh City or Hanoi and they don’t look that different to cities like Vancouver, Montreal or Pittsburgh.

There are skyscrapers, there are high rises, there’s luxury, there is an echelon of modern luxury. A lot of people my age have grown up reading about ‘The American War’.

I’ve never thought about that. Of course they wouldn’t call it ‘The Vietnam War’…

Yeah, when I started reading up on this and I kept hearing mentions of ‘The American War’, I had no idea what they were referring to. But, young Vietnamese people have moved on.

They were never really affected by the war on a day-to-day basis, especially in these cities that have 8 or 9 million people, like Ho Chi Minh and Hanoi. Talking to people, I’ve discovered that the lasting effect, like we have with 9/11, has started to fade away over the last 50 years.

In smaller towns, especially around the DMZ, which is in central Vietnam on the border between North and South Vietnam, that’s where there’s this high concentration of Agent Orange soil contamination, as well as the highest concentration of leftover landmines and UXOs (Unexploded ordinance).

That’s where my dad was stationed as well. These towns have had a lasting effect because the old American air bases weren’t torn up for a skyscraper; they’re still there with farm lands growing over them.

I spoke to one English teacher who takes his classes every year to see the rusted tanks and aircraft that are still just sitting around crumbling on gravel.

Do you anticipate feeling a kind of residual guilt as an American visiting these communities that are still affected?

Absolutely. I think it’s the same for many reasonable Americans. This is just another case on a long list of Americans, whether it’s troops or settlers, coming into someone’s home and ‘making it right’ for them. I hesitate to use the word ‘fallacy’, but it’s a tragic record going back 100s of years.

Of course I’ll feel remorse. I get nervous just thinking about interacting with Vietnamese veterans and hearing their stories. Hopefully I can open up a dialogue of understanding for American viewers, rather than drilling in resentment.

It’s incredibly important to be able to be able to hear these stories without judgement or me prescribing a tone or the types of conversation that I want to have. I don’t think that’s fair to the Vietnamese.

I want to hear their experiences the way they see them and not filtered through this idealist North American lens that can sometimes put Caucasian men in the right.

How does your father feel about you going back? Has he been quite open about speaking to you about Vietnam?

I never really inquired about Vietnam when I was younger nor was it offered up. I knew he’d fought and that he suffered from PTSD, but when I was 10 or 12 or 15, it was never really in my foresight to have an interest in it or to ask him about what it meant.

When I approached him with this idea and told him I had the funding, I asked if he’d be horrifically opposed to it. He was incredibly excited for me. I don’t want to speak for him but I think there was a part of him that wanted to go back for himself at some point.

I would certainly love to make that happen over the next few years.