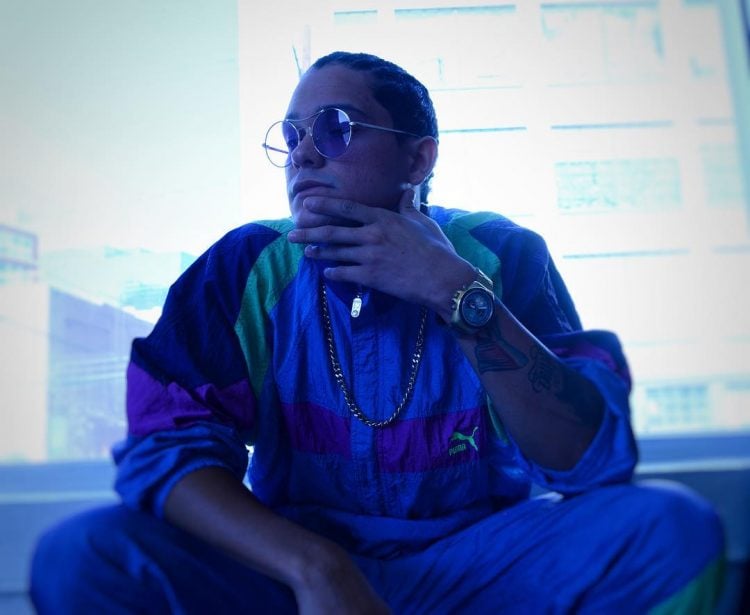 Maybe you knew him as Brandyn Burnette. Or, maybe you’ve heard one of his tracks for The Chainsmokers or Jason Derulo. Either way, Eman8 is a new direction for this rising up-and-comer, who garnered attention last year with the gospel- and funk-infused R&B track “Amen.”

So, why Eman8? The name – based on his middle name “Emanate” – goes back to the Jamaican side of his family and reflects his upbringing in St. Louis – particularly the church and its live instruments, plus the city’s hip-hop culture. Now currently living in L.A., Eman8 began the new year with a second track, “Inspired,” meant to foster positivity and offer an uplifting vibe.

Both tracks are expected to lead into a self-produced, self-titled, and self-released album by the spring. So, as he gears up for this full-length release, we had a chance to ask a few questions:

Your first single “Amen” dropped back in October. How does it feel to have your first solo track released as EMAN8?

It feels very exciting to have the vision I have for the album starting to come together with each release. “Amen” was definitely an important place to start for me, as it symbolized my departure from Brandyn Burnette into this new chapter.

What was your process for creating this track?

I made “Amen” with Nick Henriques and Sean Fischer one day in LA. They were in town from Canada. I told them that I was starting this new project, a new direction, and explained a little bit about my influences.

Then, we all started working on the track. Each of us had our strengths, Nick was working on the drop, Sean was coming up with the chord inversions, and I was writing the lyrics, melody, and co-producing. Everything fell together very organically.

As an artist, who or what influences you?

I’m influenced a lot by daily experiences and conversations and things I’ve witnessed. I love storytelling songwriters and artists. And, I’m attracted to live instruments and soulful elements when it comes to my musical influences.

You changed your artist name to your middle name. What inspired you to do this?

When I was 8 years old my mom and my step dad got married. I took on his last name “Burnette”. Before that, it used to be Brandyn Robert Emanate Folkes.

I don’t keep in touch with my biological father, but I do have a connection to the middle name Emanate as it was a Jamaican middle name passed down in my heritage. I felt like Brandyn Burnette was always a stage name and EMAN8 was always who I truly was. Changing the name was more of a return to my roots.

Tell us about your latest single “Inspired.” How does it differ from “Amen”?

“Inspired” is a little more personal. Everything from the instrumentation to the songwriting was intended to feel raw and organic and stream of consciousness. I wanted to capture what it’s like to chase inspiration in a song.

It’s a little nostalgic, a little somber, but most importantly uplifting and hopefully inspirational. I also produced Inspired mostly on my own, whereas I worked with two other main co-producers on “Amen.”

You also have a full-length album in the works. What sounds or concept should we expect from it?

The songs on my full-length all have a very celebratory feeling about them. I was actually going through a very dark period of my life, losing a family member, and decided to shift my perspective by channeling more positivity.

I think that the overall sound is very Midwest soul and hip hop, but also eclectic enough that everyone can find something they like.

Aside from being a solo artist, you’ve worked as a songwriter for Backstreet Boys, Bebe Rexha, and other artists. How does writing for someone else differ from writing for yourself?

I love writing with and for other artists because it’s a chance to collaborate in a way that breaks all the rules.

Bebe Rexha is a great example of that. She’s a pop artist, with features on G-Eazy, and yet she had the biggest country song with Florida Georgia Line. Her ability to write a great song crosses any lines of genre or style.

For me, writing for other artists gives me a chance to explore styles I don’t usually do for my own artistry. But I think overall, I love being able to give a little bit of my artistry in every song that goes to someone else.

And, it’s the coolest thing when you see a song connect with an artist so much that they put it out and it connects with their fans.

Since this is a fashion/grooming blog, how would you describe your personal look?

I am a thrift shopping king. But, not the cheesy thrift. Growing up in the ‘90s, I would say I have a quirky fashion sense. I used to tell people that Fresh Prince of Bel Air was my fashion icon.

How has your style evolved over the years?

I pretty much dress how I dressed in my early years as a kid. But, I went through a very awkward preppy stage where all I wore was Abercrombie or Hollister or American Eagle. It was the thing with my high school.

I’ll never forget my sophomore year popping my collared t-shirt with my pukka shells & Birkenstocks. (Not my proudest stage.) Then, there was my college period when I moved to New York.

I lived on the Lower East Side, which was a very grungy scene around 2010. I used to call my style grunge hipster. It was just more like broke college kid, haha.

I am half Jamaican, so the way I treat my hair is important. I don’t really use shampoo too much daily because it strips my hair of all the oils. But, I use something called Argan Oil, which helps with my curls. I recommend it for people managing ethnic hair like myself.

I don’t grow hair too much on my face except a mustache and on my chin and neck. So, I usually just self-maintain there.

I’m kind of a freak when it comes to my skin. I had horrible skin growing up. I used to pick and prod at it all day. I get my skin treated at natural places to restore damage from the past.

I also have a barber I go see in Burbank about every month who cuts my hair with a nice fade. Anybody can give you a haircut but not many people do it like my guy Oscar at Oscars Barbershop.

Join us for special offers, discounts, giveaways and assorted dapperness.