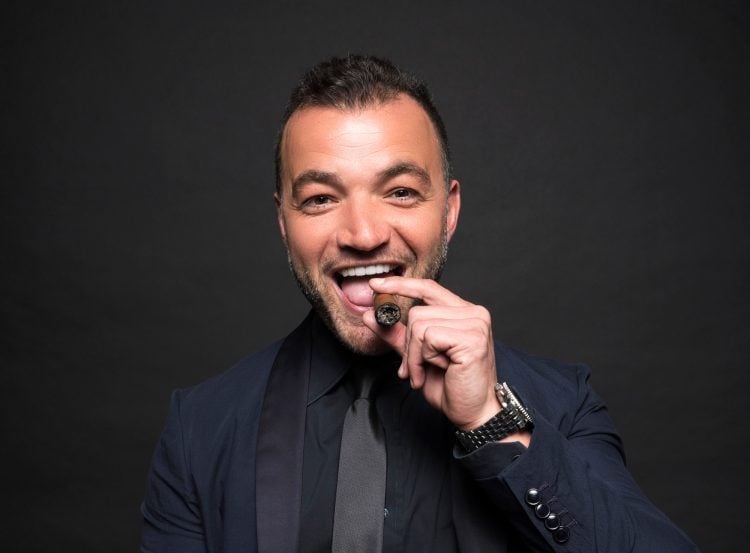 Best known for his work as Ashur in the worldwide hit series “Spartacus: Blood and Sand,” Nick Tarabay appears in several cool projects for 2018, including Universal Pictures’ “Pacific Rim Uprising.”

He emerged as a fan favorite, as Cotyar on “The Expanse,” a smart, action-oriented SYFY series that presently finds Earth, Mars and The Belt at war, with Cotyar, a freelance security contractor and former UN Military Intelligence Division member, on personal security detail for the effective head of the United Nations, and personal confidant.

After watching numerous episodes of The Expanse and Spartacus, including Ashur’s glorious 5-minute death scene, I’m hooked on both shows. After talking to Nick, I’m not only smarter about style, fabric and fragrance, I’m a huge fan too.

I’ve been watching The Expanse and Spartacus the last few days — you have one of the most gruesome death scenes in Spartacus. In fact, Googling, I found it on several lists of most glorious death scenes.

Good on you for doing your homework. I appreciate that. Well, you know my character had a big impact on the show, so getting get rid of him wasn’t easy.

At what point did you get interested in fashion and style?

I think since I was born. I love fashion. My dad and my mom were really well dressed people. I grew up watching my dad wear suits to work and making sure everything was put together to perfection.

And not only the suit and the tie, but also the cologne. You could smell him before you see him. When you put a suit on, your whole attitude changes. I love that feeling.

I used to say, it’s amazing how a piece of cloth can make you feel so good, but it really does. If you put a suit on, you’ll walk different, you’ll talk different.

And then when you put on shorts, slippers, and stuff, that’s going to change you too.

When you’re at home or off work, what do you wear?

I always try to dress up. Even when I dress it down, it’s still really nicely put together. I love fashion, and I worked in fashion a really long time. Before becoming a full-time actor, I worked for Hugo Boss. Right before I quit, I was working for Gucci.

I love good clothes, good shoes, good perfume. I like to take care of myself because it makes me feel good, and that’s just the way I see myself. Recently I got a couple of suits from Tom Ford, and damn.

I put these things on and I was like, “Woo! James Bond, move aside.”

What’s the one thing you do before you run out of the house?

Make sure I smell good. That’s another thing I have of mine I love. Good smells. In any given time, I have five, six different colognes. I go out of my way to find perfume.

If it’s a popular fragrance, I won’t have it. I’m like, “Eh, I smell it all the time. No. That’s not interesting.”

Does your sense of style come across in your acting?

A lot, because fashion is a form of art. You cannot separate one form of art and another. The attention to details. The look, the package. All this behind the scenes.

From the seamstress, from the fabric, to the tie factory, all these things that go into work. All this stuff behind the scenes that give you this beautiful fine product in the end. And it’s kind of the same thing what we do in acting.

You put on a nice suit versus a cheap suit. A nice suit will just hug you. You feel its warm hug, versus you put on something cheap, because no one put any good labor into it, and you feel like, “Eh, it’s on.”

And it’s kind of the same thing with acting. You half-ass it, you get an eh performance. But do your work, and the character becomes you.

Go to Tom Ford or Zegna or Brioni, and put a suit on. And see how you feel. Then you’ll get it. You’re like, “that’s worth paying the money for.” It’s the same thing with acting. That’s why I always say, I have to earn people’s money. People are going to pay money to subscribe, so I have to earn that.

Who are your stylistic influences?

I love Conor McGregor’s style. I mean this guy puts it together right. It’s interesting, especially coming from the sport that he’s in. He’s a fighter.

So before Conor McGregor came to the scene, you see fighters wearing T-shirts, flip-flops and what not, and then he shows up and he puts those custom made suits and ties and shirts, and then he stands out.

When you put a nice suit on, you get why someone in his position would wear it  — because it makes you feel powerful.

How have you cultivated your personal style?

Practice. Just like everything else. The best thing I say in fashion, as in acting, it’s always good not to be safe, to try new things.

A lot of times people will see stuff we like, but, “Oh no, no, I can’t wear that because if I wear this someone’s going to make fun of me.”

What’s the one piece of advice you’d give a guy who wants to level up his personal appearance?

If you like something, go for it. Don’t worry so much about what people think, and always remember the number one person you need to take care of the most is you.

I will never ever be cheap on myself, ever. That’s just sending a wrong message. Make sure you always take care of yourself.

Besides style, how do you take care of yourself?

Uncensored writing. I read this book a while back called The Artist’s Way. One of the things that it highly recommends is, every morning you wake up and write three pages and not think about it.

What that does is takes all that clutter and most negativity out of your way and gets it out of your system so now you can receive better.

And sometimes the positive one, you put out it into the universe. It’s really nice. I love it. It’s very therapeutic.

I’m not a big fan of yoga but I do kundalini, it’s a form of meditation. But then again, meditation is everything. Swimming, walking, and listening to music, whatever gets me out of my head and into my body, I love.

Anything else you want to leave the readers with?

A lot of people have this misconception that fashion or skin care or cologne are all more leisure things and not a necessity in life.

I want to change that mentality. It is very much a necessity. It’s very much needed. Self-care is not only mental but it’s also physical. You go to the gym. You go on vacation. That’s also a part of it.

I’m not so much shaving. I always have to have my Philips Norelco clippers, because I don’t really shave. That’s rare. I’d say maybe twice a year, maybe that I’ll completely shave. When I did The Expanse I had to grow my beard really long. As soon as I finished, I took it all out. Zero. I just needed my skin to breathe a little bit.

I don’t use a lot of hair products, but there’s one that my hairstylist told me I should try. It’s called​ Broken Dreams, which is a sad name for a product, but it works!

There’s one face cream which I absolutely love. It’s an Italian brand called Rephase. It’s just an amazing face product. I love it. It keeps your skin hydrated and young.

For body lotion, there’s one called Acure. That’s always a good one. It very hydrating, especially living in L.A., it gets hot a lot, so you want your body to always be hydrated.

I don’t want to give away my secrets! I’ll give you some but I’m not going to give you all of them.

Another one is called Portrait of a Lady. But I’m not gonna give you anymore. I’m sorry.

Nick Tarabay.  From a gladiator in ancient Rome, to a CIA black ops agent tracking down people with special powers, and a self-righteous police lieutenant, Nick has brought to life diverse and dynamic characters in film and television, emerging as “one to watch” in the entertainment industry.