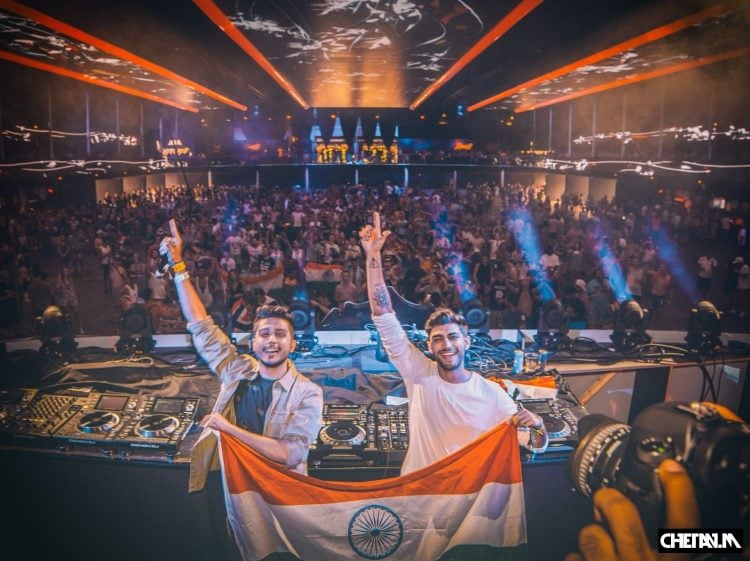 The DJ Mag polls don’t lie: The world’s top EDM talent continues to come out of the Netherlands and Sweden, with Italy, France, and the U.S. following behind at a distance. Yet, dance music isn’t exclusive to Europe and North America, and over the past few years, we’ve seen major talent come out of East Asia – South Korea’s Raiden, for instance – and South Asia. Perhaps the most visible, Zaeden and Lost Stories took that growing visibility up a level – or, rather, doubled it up – on last year’s track “Uncomplicated.”

Born Sahil Sharma in New Delhi, Zaeden got attention for remixing Coldplay, Maroon 5, and Justin Bieber and, even at one point, opened for the popstar during the Mumbai date on his Purpose tour. Like many EDM talents, his background involves playing an instrument – in this case, piano and the tabla – and eventually progressing to DJing and producing. Giving him a serious boost, Hardwell featured one of his tracks early on – in fact, he’s one of the youngest DJs to be played on Hardwell On Air – and getting signed to Spinnin’ seemed like the next logical step.

Bumping up his profile, a collaboration with Borgeous and a set at Tomorrowland increased his mainstream cred.

Lost Stories – the DJing/producing duo consisting of Prayag Mehta and Rishab Joshi – have followed a similar career trajectory. Signed to Tiesto’s now-defunct label Black Hole Recordings, they did remixes for Alan Walker and Afrojack and put out a full-length studio album, Music For The # Generation, which featured single “How You Like Me Now.” Their cover of Bieber’s “Sorry” has since reached over a million views on YouTube, and they, too, have appeared at Tomorrowland.

Encouraging other talent in the Subcontinent, the duo set up their Lost Stories Academy in Mumbai, India, with the goal of training other up-and-comers and helping direct their careers.

As both acts see their profiles rise, we had a chance to interview them about their collaboration:

Since we’re a style blog, let’s start off with a grooming question. What are your most essential products?

How did you end up working with Lost Stories on “Uncomplicated”?

Zaeden: Working with LS is always fun. They’re someone I really look up to, and whenever I sit with them, I learn something new. “Uncomplicated” started before we headed for our Tomorrowland performance. The instrumental was literally done in 3-4 hours. Everything just fell in place after we had the guitar riff and the melody running. Knowing that how effortlessly we made “Uncomplicated,” I’d love to work on another project with LS. They’re awesome!

Lost Stories: We’re really good friends & touring together most of the time. We always wanted to get into the studio together, and last year, we finally found time.

What was your creative process for working on “Uncomplicated”?

Zaeden: Talking about the instrumental, we wanted to make something that sounds anthemic for Tomorrrowland but could also be played on the radio. We decided to start off the song with the guitar. I messed around and came up with the existing riff and Rishab really liked it. He gave the guitar this tone that made it sound kinda vintage and really different. Once we had the riff, we just kept adding elements, like the snaps, whistle, and gave the buildup a nice compelling groove that complemented the vocals.

Creatively, I think Rishab and I found a great balance where both of us knew what the other person is good at and gave each other freedom to explore. That’s exactly why I think why we were able to do something fresh.

Lost Stories: It was super organic. It all started with a guitar riff Sahil played and we built a song around it.

How did you guys end up working with vocalist Matthew Steeper?

Zaeden: Matthew actually is the voice behind “Faking It” by LS. He’s a great singer and songwriter. Since LS had a great time working with him, we decided to use him for “Uncomplicated,” as well. He was so fast with the writing and sung the song sooo well. We’re glad that we got Matthew on this project.

Speaking of vocals, you, Zaeden, have your own debut vocal EP scheduled for this year. What should we expect?

Zaeden: I think I got too excited as always and announced the EP launch, haha. But yeah, it’s still in process. I recently finished my music exclusivity deal with Spinnin’ and [am] free to work with any label. Sometimes, it could take a while getting something out there on a record label, as they have releases by other artists scheduled and I personally like working with a label that just doesn’t give me the distribution, promotion, and puts the song out there but also shares a similar vision with the project. So yeah, as I said, it could take a while! About the EP, I’d say it sounds fresh, simple and me.

In terms of your background, how did you get started producing and DJing?

Zaeden: I actually used to listen to a lot of progressive and trance back in the day. I got Ableton (a digital audio workstation) and started watching tutorials on music production and tried to remake my favourite songs at that point of time. DJing was something I was doing on the side. I once participated in a local War Of DJs, after my 3rd DJing class and beat all the DJs that had like years of experience by winning the competition.

I still remember that moment as if it was yesterday. So yeah, that really motivated me and kept me going. As a producer, it was when Hardwell, Tiesto, and other DJs played my bootlegs on their radio shows, I decided to do this full time. Luckily, my parents supported me a lot and believed so much in my vision that they even let me drop out of college and take my passion to the next level.

As an artist, who are your influences?

Lost Stories, tell us about being the face of Budweiser’s “Free Yourself” campaign. How were you selected? What was your experience?

Lost Stories: I don’t exactly know the process of how we were “selected” but the experience was amazing. Budweiser is one of our favourite beers and we were proud to be a part of the Free Yourself.

You were invited by Pete Tong to perform at IMS Ibiza. How did you feel receiving an invite from Pete Tong?

Lost Stories: Was pretty surprised, to be honest. Don’t remember much from that trip but who remembers their first time in Ibiza, anyway?

You both have remixed a few pop and major artists. What would be your dream remixing projects?

Zaeden: I always wanted to remix Maroon 5, and by god’s grace, I got to remix their hit single “Don’t Wanna Know,” officially through Saavn. A future dream remix project I think would be for Ed Sheeran or Shawn Mendes. Yeah, that would be awesome!!

Lost Stories, early on in your career, you, in fact, put out a few tracks through Tiesto’s Black Hole Recordings. How was it working with one of the biggest names in trance music?

Lost Stories: At that time, our minds were blown. We were the only guys doing this at that time, and we were honored to work with his amazing label.

You’ve been one of the few Indian artists to perform at Tomorrowland. What was this experience like for you?

Zaeden: One word: Magic! Truly blessed to be playing at the second biggest stage at TL this year and representing the country along with my bros Rishab and Prayag from LS.

Right now, you just wrapped up a major tour. What should someone expect at your shows?

Zaeden There’s so much more music coming out, but most of it is simple pop and the kinda music that I won’t play in a club as it doesn’t fit my set, but I do make edits and test it out, anyway. I’m singing most of my songs and that’s exciting. Got some Hindi songs coming out, as well. Nervous and excited for that!! Also doing a lot of B2B sets with LS, and that is always fun. We both go crazy when we play together. So yeah all geared up for the lined-up shows. Hope to see you around!!

What’s it like being one of the biggest EDM acts to come out of India?

Lost Stories: Honestly, we don’t think too much about it. At the end of the day, if you haven’t done an honest day’s work and got yourself to write a great song that can move people, then how does it matter if you’re the biggest? We just want to write more and more music and not get caught up with titles.

Right now, we’re locked up in the studio not thinking about anything else. Hopefully, we’ll have some big announcements to make by the end of January