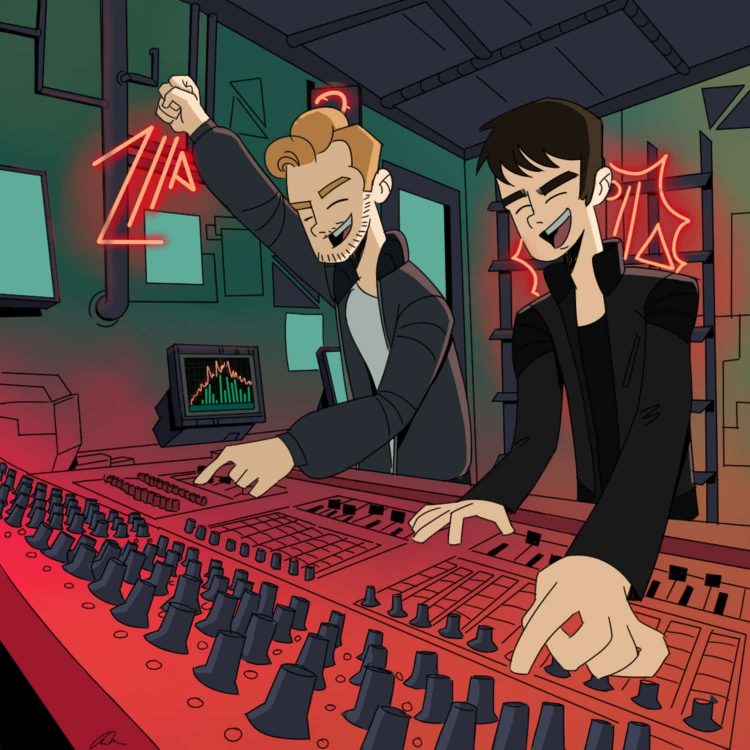 Some artists simply work better together. You can easily say that about French DJs Arno Cost and Norman Doray, who collaborated on recent single “Together,” a flawless fusion of disco, house, and electronica that simultaneously sounds retro and modern. Yet, while the two have worked with other top-tier EDM producers, including Avicii, John Dahlback, and Laidback Luke, they’ve essentially become enmeshed.

Both entered the scene under moniker The Freshmakers – a three-way collaboration among Cost, Doray, and Pierre de la Touche. Track “Let U Go” dropped in 2006, on label Serial Records. A year later, the two put out “Apocalypse,” and by 2012, they released “Trilogy” on Laidback Luke’s Mixmash Records. Over the past decade, their relationship further led to remixes for Ministry of Sound, Cr2, and Joia.

Equal to the sum of their parts, Cost and Doray also firmly stand out as solo producers. Cost, for instance, was commissioned to remix David Guetta’s “Titanium” and Martin Solveig’s “Ready 2 Go,” while Doray has released tracks on Spinnin’ Records, SIZE, LE7ELS, Defected, Interscope, Strictly Rhythm, and Atlantic.

With “Together” being a must-listen track for early 2019, we had the chance to speak with the on-again-off-again duo about this and other projects:

While both of you have successful solo careers, what’s the story about your ongoing collaboration?

We met more than 10 years ago in Paris and started our career as a duo for a couple of years. We made so many records together, and so many shows…After that, we also wanted to try something solo on the side, but still making records from time to time together. Last year, we talked about doing a new record, and “Together” was born

What was the concept for “Together”? It sounds both modern – you could easily hear it in a festival set – and retro.

When we make records together in the studio, we always try to come up with something special, totally original. Our influences are from rock to disco, but also the ‘80s. “Together” has this ‘80s feeling…Something that brings you back in the past, but with that slight touch of energy from today.

How did you go about recording this track together?

The process was quite long, as we are really picky with every element in a song. We made the track between Paris, Barcelona, and Stockholm

In between working as a duo and doing your own thing, how do both of you balance your careers?

Balance is the key. We love spending time in the studio, working on some ideas, but we also like to be on the road. We would say this is 80% of our time. What makes the difference between now and 5 years before, is also taking more time off, so we can spend it with our love ones

You both have collaborated with other artists, including John Dahlback and Avicii. Whether for yourselves or as a duo, who would you like to collaborate with in the future?

We are already busy with our solo stuff and the music we are making with each other…For now, we are just focusing on new material after “Together.”

Sometimes, you’re called the French Swedish House Mafia. How do you feel about that?

We never heard that before, haha! Those guys have had a great success, but I’m not sure what to think about it, as we are not exactly making the same type of music.

Festival season’s about to start in a few months. Where should we expect to see you?

Festivals are great. Always a good way to gather with a lot of fans at the same time, but it seems we prefer small and sweaty clubs. Let’s see what is gonna be our 2019 summer!

In terms of traveling to festival and club gigs, what items are your must-bring?

No doubt a USB stick, headphones, and ear plugs and a smile, of course

On the road, what’s your approach for grooming?

It is never easy to feel and look 100% perfect while traveling non-stop. We try to get as much sleep as possible to look fresh and to bring our hair gel and spray for our shows. It is important to take care of ourselves, especially while playing in front of a crowd. While in planes or cars, we frequently wear hats, which is the easiest solution for us

You both have a lot of experience, in terms of producing, DJing, and touring. What advice do you have for up-and-comers?

I guess the best advice that we are giving since years now is to take your time. Make sure you’re ready to go through ups & downs and you are mentally strong enough. We saw what happened with Avicii, Luciano etc…

Whether it’s your next release as a duo or your own solo releases, what should we expect from you next?

We are currently working on more records together, so expect a busy 2019 from us!