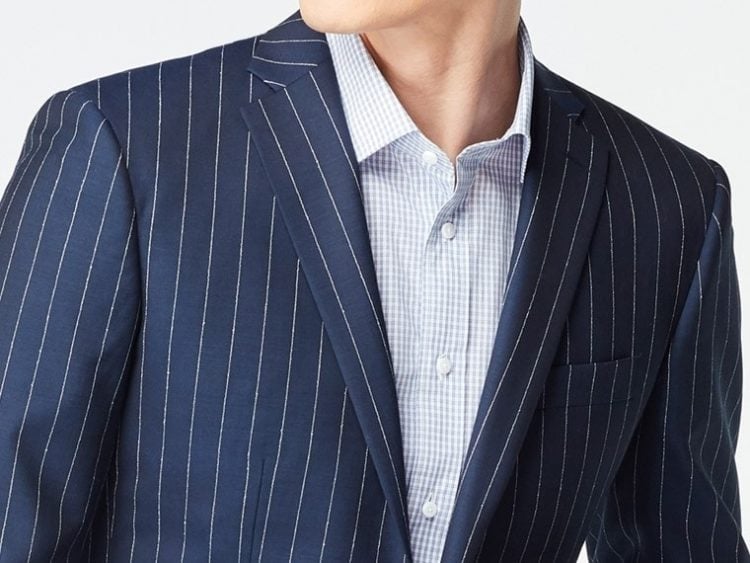 In terms of fashion trends, you can’t get any eviler than pinstripes. The print, while around in some form since the 19th century, comes with the baggage of the finance industry. In the ‘80s, that would’ve been the greed-is-good culture of Wall Street, where the pattern’s anti-solid appearance symbolized your risk-taking attitude.

By the ‘00s, though, it went a step further, transforming into the lender who lied about your assets to give you a shaky subprime mortgage or the big-name bank that foreclosed on your home. He shows no mercy, and even profits off your misery.

As such, pinstripes’ disappearance around the Great Recession was only inevitable. Professional dressing, from this point on, headed into a less-formal direction, as if to get as far away from the finance industry’s deception and phoniness at any cost. Thus, we’re in an era of smart-casual dressing that even Goldman Sachs openly adopted earlier this year.

So, then, why are we seeing more and more pinstripes? Although, fashion wise, trends do cycle every 20 years or so, their return feels premature. On the other hand, the present’s supposed economic stability leaves more room for confidence, and through this window, they’ve started to trickle in, albeit at a glacial pace.

Where did pinstripes come from?

Modern character aside, pinstripes emerged some time during the 19th century. Some accounts go back to the British banking industry, where each bank institution’s uniform had its own pattern, color, and weight. On the other hand, the period’s boating uniforms further utilized pinstripes, and as with many menswear trends, their everyday adoption occurred a few decades later.

Why do the Yankees wear pinstripes?

Baseball may have brought out and solidified their more maverick nature. The Chicago Cubs took on the print in 1907, and later, the New York Yankees stole it for their own uniforms. Since that point, other teams have dabbled with pinstripes – perhaps to stand out and hint at the same devil-may-care attitude – while 1970s cult movie The Warriors took them on a violent, almost grotesque turn with the Baseball Furies gang.

That same century, perhaps cementing pinstripes’ reputation even more, they evolved into the garb of gangsters – flashy, with a catch-me-if-you-can air. Movies only emphasized that outlaw nature, from Clark Gable’s roles to the casts of Goodfellas and The Godfather sporting pinstripes in some form.

The pattern, throughout the eras, has always appeared uneven. On a dark background – usually charcoal, but you’ll also spot navy – lighter colored stripes, traditionally no wider than 1/16th of an inch, break up the solid shade. They’re distinctive enough to be noticed from a distance – you’ll never mistake a pinstripe suit for a solid variety – but they don’t have the overt boldness of beach chair or candy stripes.

In their most modern incarnation, pinstripes surfaced on red carpets roughly three years ago, presented as a two-tone, uneven take on microstripes. You could spot their origins, but something was a bit different this time around – a tad bolder, a little bit wilder, and crazy without being destructive.

Runway wise, we caught note of them back in 2018. Alexander McQueen brought them back to life with an exaggerated silhouette featuring a higher, drawn-in waist and strong shoulders for a clear masculine/feminine dichotomy.

Alex Mullins and John Lawrence Sullivan, as well, broke down their precision, taking apart their dark-light contrasts and playing them against a dad shoe to hint at their former status.

This last point – a subtler update to dad style – paints their current trajectory: Pinstripes aren’t quite filled with the braggadocio they once had – these days, that’s reserved for Supreme – but they’re far from demure. Especially in a world where checkerboard and floral prints push the boundaries of menswear, pinstripes feel tame: As such, they’re a step or two above solids, and emphasize the “business” side of your smart-casual wardrobe.

How to Wear Pinstripes

With all of these points in mind, here’s how you can approach pinstripes in modern times:

That is, they offer a light highlight for solid shades, and tend to lengthen your torso without resorting to Beetlejuice boldness and proportions. Yet, so their origins remain intact, keep the width uneven and the colors contrast heavy.

At the same time, varied, multi-stripes are the new power dressing. So, if you have horizontal and thicker vertical stripes in your wardrobe, pinstripes within the same palette throw in a third variable that ties everything together.

2. Avoid Pinstripes on Anything Formal

Too soon, too soon. Especially with double-breasted suit jackets, the banker vibes come out. Although this retro staple is having its moment – also in a more casual form – the two trends haven’t quite found their confluence yet.

Rather, treat pinstripes like any other patterned version of a casual piece: A subtle pop on your chinos or camp collar shirt, and a toned-down stripe infusion.

These days, between casual suits – ankles rolled up and shoulders soft – to colored denim, pinstripes have a clear niche. And, with this in mind, try to keep them to a single item: A blazer, a bomber, or a single pair of pants. There’s still a chance you’ll give off a whiff of finance bro or old-school baseball hero.

3. Dabble with Pinstripes in a Different Color Palette

Charcoal and navy? You can do better – and find more variations, too. For starters, we’ve come across what’s best-described as “reverse” pinstripes: A solid white, off-white, or light grey background setting the stage for black or navy pinstripes. Because it still feels a bit baseball-y, we advise keeping this pattern to your shirt or a casual jacket.

As another alternative, there’s the pop of color pinstripe. This combination begins with something traditional, but the stripes themselves aren’t white or another light shade. Instead, we’ve spotted them in warmer hues – red, yellow, or orange – or a contrast-heavy cool tone, like turquoise or cobalt.

And, on the subject of cobalt, brighter, royal blue hues have been having their moment over the past year. For a nautical take, consider a pattern starting with one of these shades, with slightly wider white stripes crisply breaking it up at regular intervals.