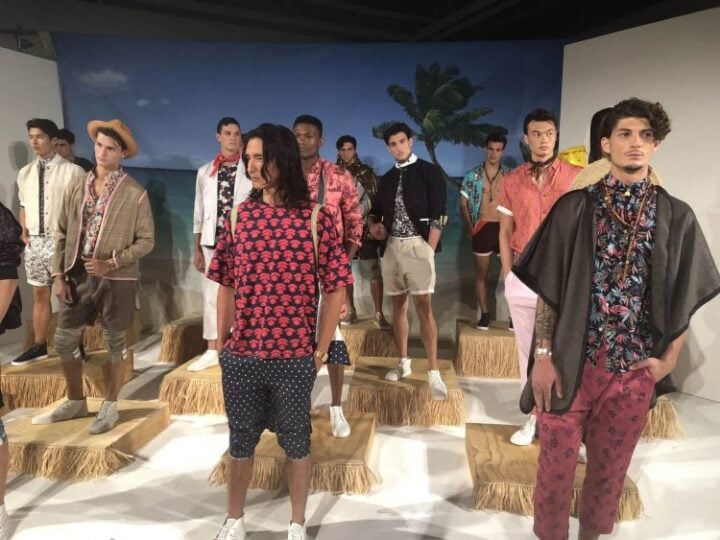 As more and more designers combine their men’s and women’s presentations, the question of whether menswear needs its own separate Fashion Week has come up more than once. And, as the major names gravitate toward Paris and Pitti Uomo, London and New York appear to be left in the dust.

Or, is that just a misconceived perception colored by the lack of branded clout? Menswear’s shift toward more streetwear-based silhouettes and scattering across a range of styles has opened up the gates to a bunch of up-and-comers, who otherwise would’ve sat toward the back – if not outright been ignored.

With them comes a certain eagerness and almost startup-like push for innovation that gets lost when a brand has to account for risk and customer loyalty. As such, London, based on this last group of presentations, saw itself steeped in dance culture-leaning presentations, and New York became the location for the optimistic designer who believes that athleisure’s not dead.

On its surface, New York does seem like a letdown. 20 presentations were allotted to three days, and the past stalwarts – John Varvatos, Raf Simons, and Tom Ford – were absent. In place were Public School – which opted for an exhibition with mannequins, rather than a full show – and Todd Snyder.

Yet, if you get out of this mindset, NYFW functions as a bubbling-under-the-surface concept: Who’s going to make it big, and where’s menswear actually going?

Public School’s status, in this case, shaped NYFW’s overall tone, but their exhibition, in a new Chinatown storefront and indicative of their changing approach to fashion, surprisingly wasn’t a standout.

Rather, leave it up to the newer guys. Suits, of course, weren’t absent, but streetwear’s growing spectrum took up more literal and figurative room.

During New York Men’s Day, the opener featuring some of the event’s first-time designers, HBNS went for a workwear-and-denim theme, framing its Dickies-style pants, splatter-painted denim, and two-piece outfits with metal piping, wood beams, and step stools. The message was clear: What was underground is about to renovate the mainstream.

Less literal, Bristol Studio, another New York Men’s Day Brand, painted its traditional athleisure silhouettes – more emphasis on the athletic in this case – with a palette of beige neutrals, pink, and orange-yellow.

Dad shoes, from a collaboration with Adidas, stripped away all the puffiness and impracticality we’ve seen from Balenciaga and Vetements, and replaced it with a sleeker, runner’s silhouette.

Touching on the gorpcore phenomenon, Christopher Bevans’ Dyne went back to his hometown of Portland, Ore., for inspiration. Although the city’s associated with everything from Gus Van Sant through fancy donuts and hipsters, its core is still within the Pacific Northwest, which came through with wider-cut hiking-style pants, ponchos, and dad caps.

On the subject of Balenciaga, the heavy-handedness of last year’s presentation gets replaced with subtlety and inferences. Take David Hart, one of the few collections to actually center around suiting.

The message, at this point, emphasizes that there’s always some degree of femininity in masculinity, and the seahorse brooches more than brought it all together.

Yet, Hart’s collection further focused on the themes of the Watergate scandal, with a period tape recorder and typewriter adding a clear reference. Although the incident happened decades ago, Hart’s usage essentially goes for that history-repeating-itself trope.

Also creating a message for today’s political climate, Willy Chavarria focused on the immigrants living in this country, particularly on the East and West Coasts.

Yet, rather than grab for and incorporate cultural influences, Chavarria took an indirect approach with streetwear silhouettes from the ‘90s and ‘00s, illustrating that, no matter where you are, it’s a universal force.

Bode went for another blink-and-you’ll-miss-it reference by using Khadi cloth for its garments. Much of the line went for spacious, colorful leisure vibes, but the material’s symbolic of Gandhi’s peaceful resistance, during which he encouraged India to manufacture cloth from domestic yarns in the 1940s.

From the start of New York Men’s Day, it was apparent that certain collections were meant to be worn by both sexes.

AGENT, for instance, draped its male models in dad fashion and athleisure – think stonewashed jeans and oversized shirts – and included a few women in wide-legged, almost skirt-like pants. Essentially, it was androgyny without the showiness.

On the other hand, as NYFW progressed, that frilliness emerged – almost to NICOPANDA-esque proportions. For instance, Alessandro Trincone sent male models down the runway in ruffled A-line dresses, with sleeveless silhouettes accenting their masculine form.

Kenneth Nicholson, himself inspired by 18th century dresses’ unisex nature, added ornate accents, all while basing his designs on three “chapter” concepts – The Bath, Reminiscence, and The Funeral.

On one hand, these latter two collections seem like lazy androgyny. But, it’s both a statement and a sign of the times that it’s absolutely unexceptional for menswear presentations to include purely feminine shapes.

In the past, this is where a collection like Tommy Hilfiger, J. Crew, or Coach might be. These days, Todd Snyder occupies that elevated casual area. The brand’s SS19 collection centered around an “American Tourist” concept, with bold patterns, exaggerated proportions, bucket hats, and Hawaiian prints – in shirt and suit forms.

Souvenir-style T-shirts with photo prints gave it that informal angle, of someone who’s just been on a long trek and returned home.

Descendant of Thieves, a New York-based brand and another Men’s Day presenter, looked at the same concept from a youthful perspective: Think less cross-country road trip and more spring break in Cancun.

In this case, the brand illustrated that clash through bold yet soft sherbet-like shades, bright prints, and Day of the Dead-themed motifs. However, the haphazardness of travel and nights spent out on a beach came through with clashing patterns, metallic shades, and ultra-informal silhouettes. 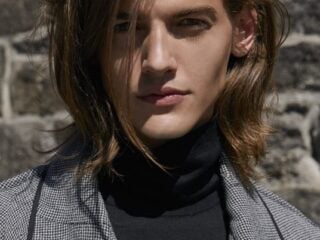