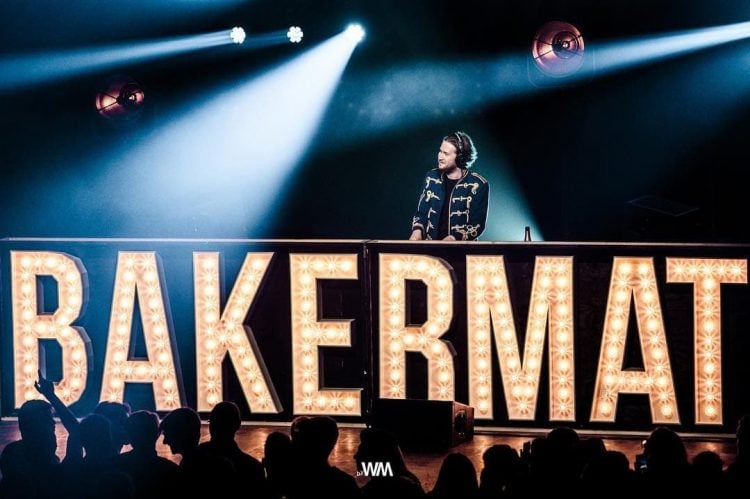 Live electronic music? Excluding the early purveyors like New Order, it’s a mixed bag in 2019. On one hand, you’ll see a producer kick it traditional with synthesizers, or see a novelty approach, like Above and Beyond’s acoustic act.

On the other hand, some – Timmy Trumpet and Zedd prominently – adapt their backgrounds in classical or jazz to the medium. Even then, a truly live show is rare.

In this area, though, Bakermat excels, scheduling series of performances incorporating saxophones, violins, and singers.

His career, in this sense, has slipped below the mainstream and circumvented underground circles, turning into something all his own.

Back in 2012, his debut single “One Day (Vandaag)” got some attention, and hits like “Living” and “Teach Me” – making up his 300 million total streams to date – only fueled it forward.

These days, he’s far from being a one-note (or one medium) performer. Although jazz, soul, and house make up the backbone of his sound, he’s worked on a few tracks with Alex Clare – including new single “Learn To Lose”. He also continues to host his monthly radio show, Bakermat Circus, and his monthly parties in London, New York City, Amsterdam, Ibiza, Paris, Rio de Janeiro, and São Paulo.

You can spot him at quintessentially mainstream festivals – including Tomorrowland and Airbeat One. Come September, he’ll be on the road for his “Under the Sun” North American tour.

We had a chance to speak with him about his recent track and upcoming plans.

How did you end up collaborating with Alex Clare?

I’ve collaborated before with him on my single “Living,” which was a great success. So when I was working on “Learn To Lose,” I was looking for a singer that could express the words with a certain passion and immediately thought of Alex. I sent him the song and he loved it instantly.

What was your process for producing “Learn to Lose”?

It started with a topline I received from Rhys Lewis, who wrote the lyrics. I fell in love with this and wanted to make an energetic, motivational production around it to fit the message of the song. I think I was done in two days! After that, I sent it to Alex, and he recorded the vocals in a week.

You’re grouped in with Tropical house, but your influences also pull from blues, soul, jazz, and gospel. In your own words, how would you describe your sound?

I don’t really feel part of the Tropical House movement, to be honest. I think my sound is kind of a thing on its own. Almost everyone immediately recognizes my productions, regardless of genre. I basically love mixing genres and creating stuff that isn’t out there yet. I guess some description could be “fusion house” or something!

From “One Day” up through your recent single, how has your sound changed?

My sound keeps evolving – I keep listening to songs and get inspiration from them. But as I said before, you can always hear that it’s me. I think because I always produce my tracks myself, instead of letting other people do it, like a lot of my colleagues do. Lately, I’m going back a little more to what my style used to be – saxophones and deep synthesizers.

You’re also known for combining disparate genres. What’s been your approach for putting sounds together, whether through software or instruments?

Regardless of genres, music is music. So, certain notes and chords just work together. That makes for endless possibilities in combining disparate genres! And, it makes it exciting. Why not combine a rock bassline with a gospel acapella? Sometimes it sounds terrible, but when it doesn’t, it’s something completely new and refreshing!

On the subject of instruments, “Bakermat presents The Circus,” your live band series, has involved saxophones, violins, and singers. How does working with live instruments compare to DJing on your own?

It’s way more complicated. Live instrumentalists require a clicktrack (giving them the exact tempo on moments without drums), a rough idea of what they can expect (setlist), and a good balanced mix. As a DJ, I just plug in my USB, but playing with all these musicians requires a sound engineer and production. It’s a lot more hassle.

You had taken some time off in 2018 to work on music. Aside from “Learn to Lose,” will we see any more material?

Very soon! I made a track with a sample of a Brazilian kids choir called “Baianá” that will be out this summer. I used to open my shows with this song, and got so many requests from people to get it on Spotify, that I decided to officially release it.

Tell us a bit about your radio show. How do you go about finding tracks and putting together playlists?

You’ve been known to appear at major dance music festivals. Where should we expect to see you this year?

I’m doing a lot of festivals, like Tomorrowland in Belgium for example. All my tour dates are usually on my website!

For 2019, you’ll be touring this summer, and have some North American shows planned for the fall. What are your must-have items for the road, whether it’s music or grooming related or another essential you can’t live without?

I can’t travel without my noise-cancelling headphones. It’s essential if you slept two hours and you’re on a plane surrounded by six babies, to have all of the screaming muted with the press of one button. I completely panic when I lose them, I basically am so used to travelling with them I have no idea how to survive a 12-hour flight without them!