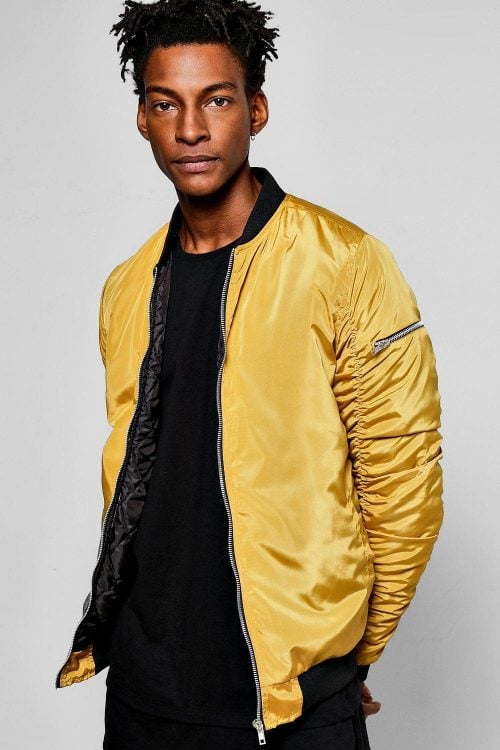 Every guy has his excuse for why he doesn’t wear yellow: “It’s too bright,” “It draws too much attention,” or “It doesn’t flatter my skin tone.” Most times, “yellow” as a collective shade brings up the color of an egg’s yoke, highlighters, or images of the sun. In all cases, it comes across as blindingly bright, too intense, or one of those shades only the most daring guys (read: not you) attempt to try. And, even then, they’ll only wear it for a season, before something better and more versatile comes along.

Yellow’s having its moment, but it has taken two directions: On one end, there’s the rave-leaning neon version, and more practical for everyday wear, mustard hues tone down everything you dislike about this color, turning it into a light to brown-tinted neutral. But, before you go out to buy a mustard yellow button-down or chinos, think about how you’ll wear it:

How to Find The Shade of Yellow for Your Skin Tone

Even within the neutral realm, not every shade is going to flatter your skin tone.

Can you wear yellow with pale skin?

As a general rule, shades on the lighter side tend to make paler guys look washed out, or worse, the supposedly softer color’s intensity suddenly ramps up. Not longer after, you’re wondering, “Why in the world did I wear this?” Thus, lighter versions best complement darker skin tones and blue-based colors.

More golden, brown-based versions, on the other hand, cover a wider range of ground. On paler guys, they resemble a lighter, somewhat more luxurious version of brown – one that pops with gold undertones but never sharply diverts attention. As well, the right shade contrasts create enough balance, so you don’t look like a ghost.

What to Wear With Yellow

As with any intense shade, start small and use it sparingly. Mustard’s much like the condiment: Too much, and it turns harsh and overpowering. But, just a little adds a spicy, vinegary kick.On the lower, more accessible end, a pattern makes a solid starting place. With geometric combinations, florals, and even stripes, it acts as an accent, frequently balanced out by blues, greens, and even grays. It’s there, but in moderation only.

If, on the other hand, a solid shade’s in the cards, layer or color-block it. Otherwise, oversaturation is what results. Instead, to approach it slowly, start with a yellow button-down below a navy blazer or paired with a dark brown or charcoal sweater on top. The combination creates a modest burst, before the cool shade neutralizes it.

Feeling adventurous? Try it on the outside, as a pair of light-colored chinos that seem like khakis with a golden glow, a rustic-leaning blazer, or even a buttoned shirt with polished-up workwear hints. And, especially when the color’s out in the open, limit it to one piece. Too much, and you end up with 2013’s neon suit trend. Don’t remember it? Check out Prada’s and Salvatore Ferragamo’s presentations from that period to see what went down, and why it turned into a massive fail.

What Colors Can I Wear With Yellow?

Mustard yellow works as an enhancer in some cases, and in others, it’s like adding mayonnaise instead of cream to your coffee: It simply doesn’t work, no matter how much you tell yourself they look similar.

Case in point: Yellow and orange is clearly reminiscent of Halloween candy, white makes you look like a hardboiled egg, purple is too much of an eyesore, and with red, you suddenly look like an oversized McDonald’s Happy Meal. While Moschino experimented with that one season, it’s ultimately a novelty combination.

And, with yellowish-green, the similarities and adjacent nature make it look like you just grabbed two nearby colors from a child’s crayon set.