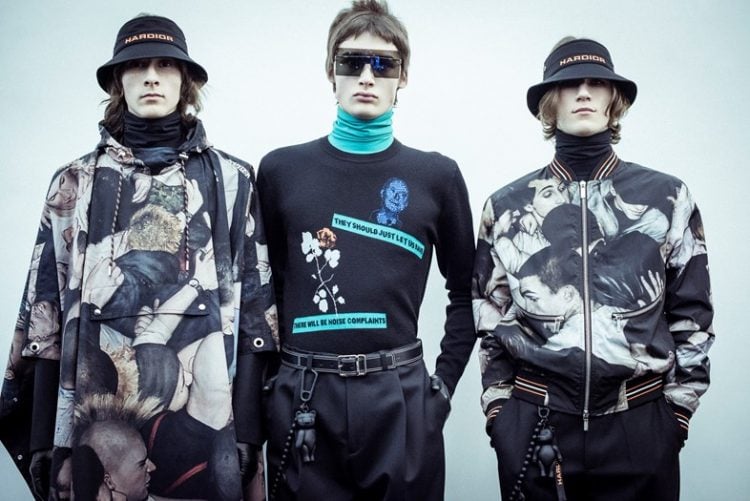 Are you getting ready for a night out at a rave and not sure what to wear? The best rave outfits for guys varies, just as “rave fashion” means a few different things. While much of it is playful, sexy and futuristic, the nuance changes based on age.

Younger Millennials and Gen Z associate it with festival style: neon tanks, digital prints, and face masks, with barely-there clothing for both sexes.

Older Millennials, by contrast, recall the warehouse parties fueled by trance music, electronica, and Kandi toward the turn of the 21st century.

And, if you’re a member of Generation X, you might have memories of the Second Summer of Love and the Madchester scene – or, at least, the sounds coming from the Happy Mondays and other acts on Factory Records.

Starting in 2017, fashion brands started pulling from these influences, creating collections that seem a bit retro, destined for the club, and a veritable grab-bag of dance music fashion.

Most of it isn’t practical for everyday wear, but perfect for a fun night out or a more playful take on streetwear. If you’d like to try it out, begin with these five points.

“Acid” goes beyond a drug or mindset to a complete aesthetic – extremely trippy, if not psychedelic, and coated in bright neon hues. You’re getting ready for a lengthy party fueled by good vibes – with nothing, not even black-hued garments, killing all that joy.

For its purely uplifting nature, neon hints at fashion’s embrace of dance music history. Topman’s AW17 collection, for instance, stuck within the realm of highlighter yellow, pink, and green, mimicking a club flier beckoning you to party at Manchester’s Hacienda Club.

Prada’s AW18 collection, meanwhile, keeps the high-energy going with wide, cropped cuts and orangey hues reminiscent of something you’d wear to a late ‘90s warehouse party. Every day, though, not everyone can show up at the bar in head-to-toe neon – let alone at the workplace. Thus, in taking a practical approach to this trend, think of neon hues as an accent, of sorts – something, quite literally, to highlight the neutral blacks and blues.

Take that Saturday night silk clubbing shirt, and amplify its swagger. These days, going out means chilling out while simultaneously looking good, and although that’s the intent of any clubbing getup, the ‘90s rave fashion truly delved into some trippy prints.

Swirls, checkerboards, anything geometric, and plenty of reworked ‘70s disco combinations, in short, fit the character of a shady venue where the DJ planned to play pulsating, minimal music far into the early hours of the morning. Although it doesn’t appear directly as a rave reference on the surface, menswear shed its aversion to prints years ago. These days, the crazier, the better.

Yet, for a clearer allusion, play one of these psychedelic statement-makers against a ‘90s-esque silhouette – a bowling shirt or even a stiff-collar, slim-fit ‘70s revival piece.

3. Top it Off with Bucket Hats

They say “Madchester,” “Second Summer of Love,” and “Dutch Hardstyle Parties” all at the same time. If any piece is symbolic of overarching rave culture, it’s the bucket hat – specifically, a relaxed almost draped style that seems like something a fisherman would wear yet covers part of your face. Dior Homme reinvigorated interest in the staple over a year ago with its HarDior collection, clearly referencing the high-BPM, synth-based Hardstyle music that proliferated in the ‘90s and continues today through producers like Wildstylez and Headhunterz.

Yet, any dance music-themed collection aiming for a clear reference – and there’ve been almost too many to count since 2016 – includes the bucket hat in some form. Out of all rave styles, the bucket hat’s versatility turns it into the most innocuous piece. Whether for casual use, to go to an actual rave, or just to keep the sun off your eyes, its silhouette puts practicality ahead of everything else.

In the late ‘90s and early ‘00s, you knew you were at a Goth club – now called a Darkwave night – if you spotted two clear trends: Plenty of black vinyl, perhaps alongside a ruffled shirt if someone went in a retro direction and bondage pants.

The latter, also found in neon hues amongst the era’s Kandi Kids, stood out with wide legs, often cuffed at the ankle, and straps crossed and buckled at the back. If you had skills, you could dance in them, but more often than not, they served as an extension of the night’s S&M-leaning theme.

These days, unless you run in certain circles, the aesthetic has all but disappeared. Runway presentations, on the other hand, have revived it to some degree, experimenting with shiny synthetic materials and randomly placed straps. Head-to-toe, you’d look as if you belonged in an ‘80s Depeche Mode music video – or, worse, like one of your Marilyn Manson-loving high school classmates.

For the modern man, approach carefully, understanding that a single strap or material contrast communicates enough mystery on its own.

5. Have Fun with Parody Logos

Parody logos involve continuing a streetwear trend that started roughly 30 years ago. Yet, its origins hark back to no single location; rather, skate, hip-hop, and rave scenes dabbled with statement-making graphics that often reference a designer or other well-known brand.

Sometimes, it’s purely playful – just poking fun at a message or bourgeois-seeming brand. Other times, there’s a message behind it – perhaps for protest, making fashion more accessible, or taking something aspirational down a notch. These days, certain brands exist solely to parody, while others, like Vetements, have appropriated their own parodied logos for their own purposes.

Yet, a few, like Christopher Shannon particularly, maintain the original approach: When you can’t afford fashion, you rework it on your own terms.