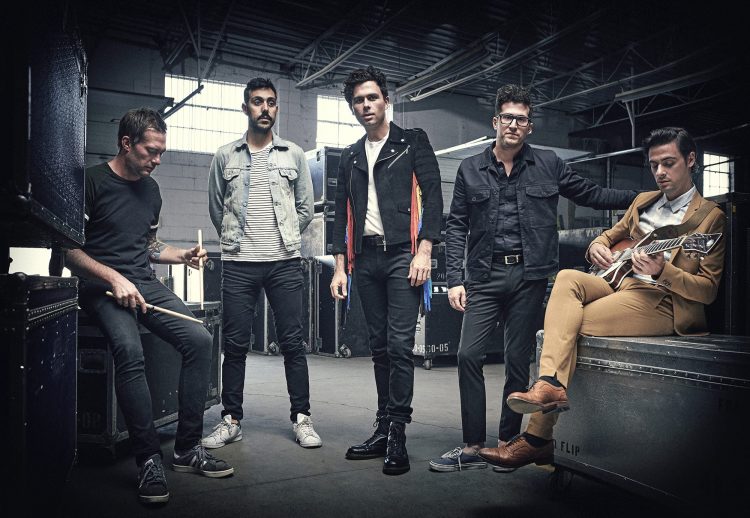 Stay still and they might not die, but they definitely wouldn’t be the same band. Formed in Hamilton, Ontario, the quintet started off with the superb Jackson Square, a hard-rocking, guitar-fueled beast born out of the music that brought them together, from Springsteen to fellow Canadian heroes like The Weakerthans and Broken Social Scene.

It was their second album, 2011’s Michigan Left, that signaled the band’s restless forward momentum. With a little more gloss here, a few more pop sensibilities there and a synth sheen around the edges, the record felt like a natural but significant progression.

That progress continued apace across High Noon andMorning Report, as the band continued to push outside their indie rock shell, emerging into a brave new world of disco beats and infectiously energetic pop music.

For most bands, a record like The Arkells’ latest Rally Cry – one that intermittently calls to mind everyone from Mumford & Sons to Chance The Rapper – would be seen as the fruition of years of experimentation, but it seems unlikely they’re about to start standing still now.

Listen to Jackson Square and then Rally Cry and the difference is startling; listen to all five records in sequence and the progression makes total sense. This is a band that will never stop moving.

It’s not just the band’s music that’s evolved; their style has kept pace too. Frontman Max Kerman was once a dedicated disciple of the ripped jeans and t-shirts favored by most young indie bands, but now he’s known for his tendency towards extravagant jackets, particularly one rainbow fringed number that very few people could pull off with such aplomb.

We spoke to Max on the phone as he wandered around the English city of Birmingham on a windy November night to chat about the new record, the band’s relationship with its fans and his snazzy taste in jackets.

We’re in Birmingham in the UK right now. I’m just out stretching my legs walking around a park. This is the tail end of the tour. We’ve Birmingham tonight and then Brighton tomorrow night and then we fly home.

It’s been really great. We’d never really toured the UK extensively before but we came over with Frank Turner in the spring and had a really great time so we wanted to come back and connect with people.

So, is this your first headline tour in the UK?

We’ve played headline shows here before but we hadn’t toured as extensively. We’ve been to a lot of places we’d never been before, like Leeds last night, and the shows have all been sold out. It’s been great.

How have the fans been reacting to the new record?

I think our fans are used to us changing with each record. We’re never going to sound exactly the same from one record to the next. The Beatles, Bruce Springsteen, most of my favorite artists changed with the times.

Take Springsteen, Greetings From Asbury Park was basically created out of his love for Van Morrison and Bob Dylan, but then you’ve got Tunnel Of Love where he started adding gated reverb to the drums and chorus on the guitars.

Do you feel like you were always working towards a dancier sound?

I don’t think that it was anything as premeditated as that. When we made Jackson Square, I was listening to a lot of 2000s indie bands, like Arcade Fire, Broken Social Scene, The Weakerthans, Constantines, Wintersleep…

It was mine too. Those bands were the reason why we formed a band in the first place. That’s pretty much all I listened to but it would be boring if I just listened to the same music since 2008.

As a band, I like to think we’re very musically curious. As I’ve got older, my music taste has got a bit bolder and wider.

I think this record was influenced by a lot of bands that I would have hated in 2008, like “What are those synths? Why do the guitars sound so weak?”

It’s funny how that record once sounded dated but now a lot of contemporary records sound just like it.

That’s the cyclical nature of music. I think about that a lot.

​Does that factor into your decision making in the studio? Is there a balance to be struck between incorporating your influences and not wanting to tie the song to 2018?

It’s really a yes and no question for us. If it makes my ears tingle then it’s a yes. But it has to be new. We have to keep moving forward. If it’s something we tried on our previous record then it’s not going to make my ears tingle.

I need to think of a different way to explain it than “make my ears tingle” but you know what I mean. It’s funny. I’ll play something for someone and I’ll be like, “You can hear the Bob Marley riff that I lifted for this” and they don’t hear it at all.

Then there’s the reverse, where people are like, “Oh I can hear what you were trying to do there. That sounds like this” when that wasn’t my intention at all.

That could be pretty cool though, sharing a songwriting credit with U2.

I was reading about the phone line you set up to release the ‘American Screams’ single. What was the idea behind that?

There are two parts to a song. The first part is writing it and recording it but then you have to make sure people hear it. In this era of social media and streaming, that can be challenging.

I was chatting to a publicist friend of mine and she was saying that music bloggers get sent something like 2000 or 3000 songs a day, or some crazy number like that. There’s just so much content out there that it’s impossible to consume.

We thought this would be a fun way to get the song out there. We drive around the US a lot and we saw all these apocalyptic billboards about God and the end of the world.

There’s a lyric in the song “Can’t sleep off those American screams” so we thought it would be cool to put that on the billboard and have a number people could call to hear the song and leave us a message.

Really, any “marketing” decision we make is down to whether we think it would be a hoot. So, doing karaoke with fans or hosting a pop-up shop is all just because we thought it sounded fun.

Did you get any interesting messages?

Most of them were really nice, like “This is so cool.” There were a few Americans telling us to get the fuck out of their country, which is fair enough.

Do you think being approachable as a band fosters a different kind of relationship with your fans?

I think the untouchable and aloof thing works really well for some bands. Like, you wouldn’t want Morrissey to be any more relatable or approachable. But then someone like Springsteen, he’s all about the connection with his fans.

He’s a workhorse and he plays these marathon shows because he loves doing it. He’ll go out into the crowd at 2pm on the day of a show with an acoustic guitar and play for the people queuing up. That’s his thing but it wouldn’t work for everyone.

That’s a pretty long-winded way of saying that I think we’re a very outgoing band and we enjoy that connection with fans. Our shows are quite exuberant. We’re entertainers. A lot of people look down on the term “entertainer” as opposed to “artist”.

When we toured with Frank Turner, he said that when he’s writing a song or recording it, he’s an “artist” but when he’s on stage he’s an entertainer. That’s how we feel.

Your style seems to have evolved in line with your music. Is that accidental or a side-effect of the musical evolution? From what I’ve seen, you have a strong jacket game.

[Laughs]Thanks. I think my fashion’s getting bolder as I get older too. It’s really fun for me. We were doing a photo shoot for an interview in London last week and the stylist looked at my hair and said, “Curly?” I said, “Well, yeah, that’s kind of my thing.”

He said, “We’ll see about that” and got his straightening irons out and started to straighten my hair. I would have been freaked out by that before but I really enjoyed it. The jackets are the same thing. There was a guy wearing a fancy jacket at the Leeds show.

He said he felt he should make the effort. I love that, that you can think back on a band and be reminded that they inspired you to buy a crazy jacket.