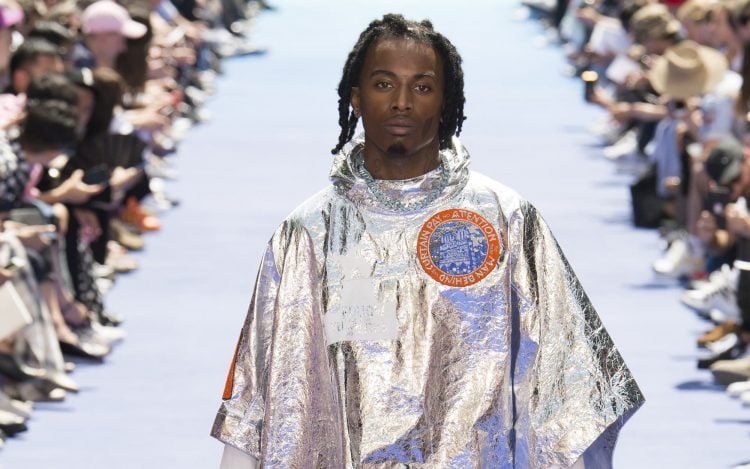 It’s hard to imagine that, less than 20 years ago, Louis Vuitton sued Supreme for adding its recognizable monogram print to a skateboard deck. But, a lot can happen over the course of two decades.

From the news, many in the fashion industry mused about Abloh’s take on the seminal fashion and luggage brand. Would he simply fuse Off-White’s aesthetic with Louis Vuitton’s? Would he infuse the fashion house with a dose of on-the-nose irony?

The possibilities seemed endless and with no clear direction, and as such, Abloh’s debut presentation turned into one of Paris Fashion Week’s most anticipated events – so much that even Kanye West and Rihanna made appearances.

But, all of it payed off. Pre-show, Abloh previewed a handful of accessories – embossed metallic monogrammed bags, with chain link details stood out – that hinted at what the audience could expect.

At the Jardin du Palais Royal, the theme of Abloh’s Spring/Summer 2019 collection emerged with a long rainbow-colored runway, and T-shirts adorning the seat of every chair.

Visually, it spelled out three of the night’s predominate themes: the concept, “We are the World,” based on light’s color spectrum; nods to The Wizard of Oz; and a new beginning progressing into the unknown.

Abloh, too, handed out a document titled “The Vocabulary According to Virgil Abloh,” which delineated how he defines common fashion terms.

But, with it, he described the presentation’s overarching theme in more detail: “A kaleidoscopic palette evolving from off-white to polychromatic, synchronously forming a holograph archway known to represent dream.”

With live band BADBADNOTGOOD performing Kanye West instrumentals, the presentation started with just white – meant to be a palate cleanser from all assumptions associated with Abloh and the brand’s former direction under Kim Jones.

Yet, its first impression illustrated both menswear’s and streetwear’s current progression: a little bit dressy, very casual, and reaching a place where wearing suits with sneakers is more than accepted.

A less-experienced designer, at this point, may have progressed through that rainbow palette with a predictable pattern.

Abloh, on the other hand, took a more circuitous route. Military-influenced menswear doesn’t seem to be dying out, and forwarding this trend, Abloh’s pieces reflected the expected – tans and light olive green, with quilted jackets and parkas – to neon, asymmetrical utility vests with pouches.

Woven in between, Abloh acknowledged Off-White’s core streetwear audience with a range of tie-dye prints: Variations on olive green and white gave way to a full-on rainbow.

Through one lens, Abloh’s simply offering his interpretation on streetwear’s current ‘90s obsession; through another, it simply carved out a detour before resuming with the show’s color prism theme.

In returning to that, bold colors saturated head-to-toe silhouettes – some a high-fashion take on monochrome dressing and others taking color-blocking to an extreme.

Abloh here, too, flashed his streetwear roots, moving away from casual suiting and more toward staples like short-sleeve tees and hoodies. Mohair sweaters and transparent duffels balanced out the dichotomy.

In 2018, you can’t be a menswear designer, let alone one with a streetwear background, and completely ignore the ubiquity of prints and graphics. Brands covering the spectrum have dabbled with at least florals, if not geometric patterns, and have reworked staples like plaid and stripes. We’ve gotten to the point that a pop art print looks fairly tame.

Abloh, as such, didn’t ignore the elephant in fashion’s collective room. Instead, the latter half of his presentation introduced a hybrid concept of sorts: A floral print based on a pop culture concept – in this case, the 1939 version of The Wizard of Oz.

If you can recall, when Dorothy, the Tin Man, the Scarecrow, and the Cowardly Lion aren’t far from the Emerald City, they encounter a field of poppies: A bold, expansive Technicolor feat of reds and oranges in the film.

This specific – and color-saturated – point forms the basis for Abloh’s digital print; an occasional glimpse of Judy Garland’s Dorothy asleep in the field solidifies the allusion.

Yet, like the rest of the presentation, the print isn’t just a one-note novelty. Rather, Abloh reuses it in colored and black-and-white forms through suiting, hoodies, and anoraks.

Complementing it, a silhouette graphic of the four characters traveling along the Yellow Brick Road emerges at a couple of points, fully illustrating Louis Vuitton’s potential direction.

So, what could that be? With skate and rap personalities like Kid Cudi, Theophilus London, and A$AP Nast gracing the runway, that’s toward streetwear’s broad horizon.

And, with ample room in the audience for local students and less emphasis on logos, that’s also away from fashion’s long-time exclusivity and perhaps toward more accessible silhouettes and concepts.