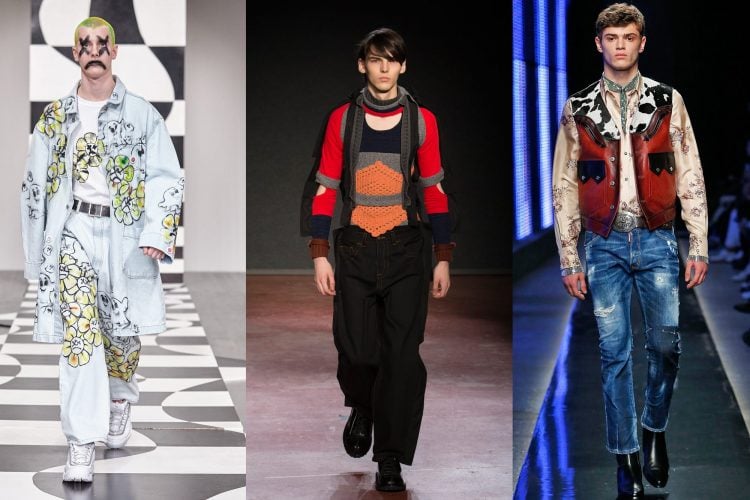 Although, by the calendar, we’ve still got a few more weeks of summer, the season’s officially starting to wind down. With it comes the obligatory Fall 2018 trend pieces, whether for sprucing up your wardrobe or doing back-to-school style. With this in mind, we’ve looked at the most accessible trends from FW18 runway presentations, and if the season could be summed up, it would be this: Everything’s bolder, youthful yet retro, and strangely fixated on Americana. Take your pick:

“Checks are in for menswear?” you might wonder out loud. “But, when did they ever leave?” For Fall 2018, there’s a stark difference between your wardrobe-basic print covering your work shirts, flannels, and suits and the one spotted on the runways.

Up to this point, tonal windowpane was as extreme as you might want to go. Typically, however, a small gingham or light woven print got the point across. But, with Fashion Week presentations as your guide, this staple has gotten a contrast-heavy makeover through a number of lenses. Burberry, for instance, revived its timeless checks through a streetwear-forward collaboration with Gosha Rubchinskiy, tartan with an intense red base is all over, and two-tone buffalo checks just make you want to grab a pair of ripped jeans and Dr. Martens. In short, plaid’s gone far more punk to the point it feels anti-establishment.

No, that’s not a misprint. Runway presentations, if you can recall, took men’s style to a gussied-up ranch, where the hardest-working people sport two-tone silk shirts with embellishments and denim reminiscent of a Levi’s 501. Cowboy boots, too, went along the fancy route, with snakeskin or similarly high-end details. Although the image projects ruggedness and man-of-the-earth, it’s more Las Vegas Strip – from its unabashed tackiness to keystone Americana trope.

Now’s not the time to reminisce about supposed American greatness. Rather, as this trend shows, it’s about taking something seemingly traditional and showing it’s all a glossy sham. Consider it a political statement without actually putting a bumper sticker on your car.

And, while the silhouettes have changed, the themes haven’t. Bobby Abley adapted the Looney Tunes to a series of high-end streetwear silhouettes, while anime, comic book, and pop art imagery have inspired plenty of other collections. To sum it up, if you’re tired of menswear’s frequent stodginess, this trend lightens the mood and lets you have some fun.

Back in the ‘90s, you couldn’t really trust the guy who told you he “listens to everything.” At the time, that meant a smattering of the top 40 hits, which were as diverse as hardcore hip-hop, grunge, electronica, and even pop country. You couldn’t wrap your head around someone saying he likes a little bit of Nirvana, Garth Brooks, and Tupac, and heads out to the clubs on Friday for some Eurodance, and 25 years later, it’s still just as befuddling.

Fashion, though, has softened this divide with an overarching trend that might as well be called “everything ‘90s.” It’s like that “listens to everything” guy, just less jarring. If you were to combine it all, Fall 2018 takes the neon and bucket hats of rave style, the silhouettes of late ‘90s hip-hop fashion, grunge’s ripped jeans and flannel, Matrix-esque accents, and the logo prints preppy kids couldn’t get enough of and fuses them all together. The result seems like a strange mood board collage of fashion, film, and music influences that somehow works.

A little too matchy-matchy? Summer 2018 brought us paired shirt-and-shorts ensembles, and for fall, this trend emerges in two forms. One, you’ve got your tapered jeans and matching jackets, often influenced by a workwear-like silhouette that’s somewhat boxy but not too structured. On the other end, casual suits have breathed new life into this long-standing wardrobe staple with pastels, bolder hues, and plenty of prints. Whereas, for the office, you’ve got to tone it down, now’s the opportunity to try out a nearly head-to-toe pattern. Essentially, at least through December, loudness knows no bounds.

When you hear the term “layer,” you quickly imagine something like a sweater or hoodie. Its sole purpose is keeping you warm, but if you’re a fairly fashionable guy, you further look for something that doesn’t make your torso seem bulky and shapeless when worn over a button-down or T-shirt.

Practicality doesn’t always have to mean boring, however. For fall, statement knits are having their moment, albeit in a few forms: High-contrast color-blocking and geometric combinations, graphics knit into the body, chunky textures, and wider, slouchier fits. In any form, your sweater has as much punch as last year’s patterned pullover.